A Darcy Fast One, Indeed!

First, a shout out to a great blog about one of my favorite sets, the 1972 Topps:

Douglas does a great job there, and his most recent post dealt with a Padres rookie card featuring Mike Ivie, Derrel Thomas and former Cubs pitcher Darcy Fast.


“Fast was pitching against his ex-teammates Tacoma for the first time since being traded to Salt Lake City early this month.”

“Lefty Rich James – who Salt Lake traded to Tacoma in exchange for Fast – is scheduled to start on the mound for the Cubs tonight. It will be his first appearance since coming to Tacoma.”

So the deal was in early May, 1970, sending Fast from the Cubs to the Padres for (former Cub) Rich James.

James, listed as Rick on his Baseball-Reference page, didn't have the deal listed either.

In fact, James' minor league page has no record of him actually pitching for a Padres farm club after he was taken from the Cubs in the draft. Both Fast and James were out of baseball after 1970, though Fast did go to training camp with the Padres in 1972, which is why he got the card featured on Douglas' blog.

This trade is mentioned in Fast's book, "The Missing Cub."

I could not find ANY pictures of Rich James, and you can imagine what turned up on a Rick James search, so here is Darcy Fast from his own website, www.DarcyFast.com: 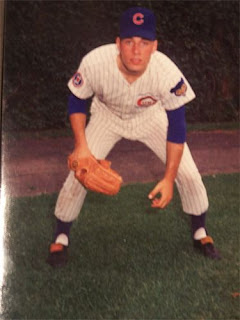