Sometimes I just pick a random team and random players from same team and run with it. This time I picked the 1948 New York Giants.


Lou Lombardo pitched for the Giants for just that one season as a 19-year-old. He started in the business as a 15-year-old! After a couple ineffective appearances, that was it for Lou in the majors and he was shipped back to the minors, and then to the Tigers' system in 1949. This isn't documented on his Baseball-Reference page, but I found the deal here, in the Toledo Blade of May 7, 1949:

“Mud Hens General Manager Bob Evans’ plans to bolster his club’s wobbly mound staff received another shot in the arm today as he announced the purchase of Lou Lombardo, 21-year-old southpaw, from the Minneapolis Millers.”


Lombardo finished his career in lower minors after that season, out of baseball at age 25.

In 1952, he goes from the Phillies' Baltimore team to Louisville in the Red Sox organization, with no deal mentioned on his Baseball-Reference page. We uncovered this from the Milwaukee Journal of June 26, 1952:

“Gordie Mueller, one of the leading relief pitchers of the American association two years ago, has been traded by Louisville to Baltimore for pitcher Ken Trinkle, 32 year old right hander, formerly with the New York Giants.”

Both Trinkle and Mueller (who played for the Red Sox in 1950) ended their careers in 1952.

Pete Milne, an outfielder, served a few years in the Cleveland low minors before going to the Giants, spending parts of three seasons in the majors.

In AAA he was a very good hitter; and the Giants sent him to independent Oakland in the PCL for the 1952 season in a trade not mentioned on his Baseball-Reference page.

“The Oakland baseball club announced today the outright purchase of William (Pete) Milne, left-handed hitting and throwing outfielder, from Minneapolis of the American Association. The price was not disclosed.”


Milne played very well for the Oaks for three seasons before going to Sacramento for 1955 in a deal described here in the Lodi News-Sentinel of March 29, 1955:

“Joe Brovia, one of O’Doul’s favorite ballplayers, will be in right field instead of Pete Milne. The latter went to Sacramento in a straight swap for long-faced Joe.”


That article was a preview of the Oaks' 1955 season. After a poor 1955, Milne played one more year in AA Mobile before calling it a career.

"Ox" Brovia, a big homerun hitter in the PCL. would get one short trip to the majors with the Reds in 1955. 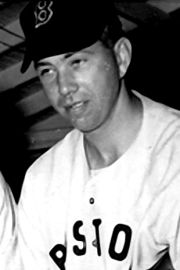 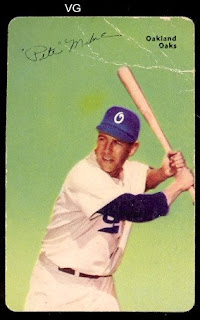 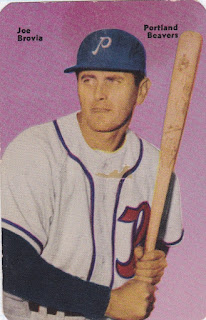 Lombardo from www.attheplate.com
Trinkle from  www.baseball-birthdays.com
Mueller from  www.pinterest.com
Milne from  www.amazon.com
Brovia stolen from richardleutzinger.com

The Comeback of Goody Rosen

Goody Rosen was a solid outfielder in the thirties and forties, mostly with Brooklyn, and then part of one season for the Giants.

He did manage to bounce around a bit, especially in the minors, but his Baseball-Reference page only has the following for his transactions:

To start things off, Rosen was property of Louisville, an independent club that eventually fell under the Dodgers banner. Rosen, according to a few partial accounts in various books, was actually sold to the Dodgers near the end of the 1937 season.

Rosen played well to start in Brooklyn, but fell into disfavor with Leo Durocher when The Lip took over as manager, and was sold off in 1940. But, not to Pittsburgh at first.

“the Brooklyn Dodgers today announced the sale of Goody Rosen, an outfielder, to the Columbus, O., club, of the American Association.”

Columbus was a CARDINALS affiliate in AAA. Rosen did not get along with the manager there and left the team, resulting in a return to the Dodgers in time to sell him back off in May of that year. One source called the Columbus sale a conditional deal.

Rosen was actually dealt to Syracuse in May of 1940, then a Pirates AAA team. The next season he stayed in Syracuse as they became an independent club. From 1942-1944, Syracuse (with Rosen on squad) was adopted by the Cincinnati Reds, explaining the gap between 1940 and 1944 in the transaction list, and why there was no mention of how he got to the Reds from the Pirates.

The deal for Lohman and Ostermueller caused a bit of a ruckus, and also included some money, according to this article from the St. Petersburg Times of June 20, 1944:

“A case in point was the recent Dodger deals which waived two pitchers, Lefty Ostermueller and Black Bill Lohrman, out of the majors……

The Dodgers, guided by the shrewd Branch Rickey, had them waived out and sold them to Syracuse of the International League for minor league outfielder Goody Rosen. The Dodgers threw in $18,000.”

The two pitchers quickly found themselves back in the majors.

Rosen had a solid comeback, he hit .325 in a full 1945 season up top for Brooklyn. An oversupply of young good outfielders allowed the Dodgers to sell Rosen to the Giants, where he famously beat up Brooklyn when the two teams played that season.

Despite a good showing for him in a Giant uniform (.281 BA, .377 OBP in 100 games), the Giants included the then 33-year-old in a post-season housecleaning after a disappointing overall season for the team. From the Spokesman-Review of Sep. 30, 1946:

Rosen would never play for Jersey City. He was tired of the minor leagues at that point and had a successful business in this Toronto home town....from the Milwaukee Journal of Jan. 28, 1947:

“Goody Rosen, who operates a successful restaurant in Toronto, is threatening to stay out of baseball if the Giants do not recall him fom exile in Jersey City”

They didn't, but some accomodation was made for Rosen to spend his last year as a player in Toronto for the Maple Leafs team. I couldn't find that transaction.

Rosen was a very talented player that is still honored by the Jewish community and the Toronto area today. 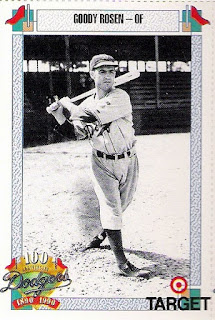 Rosen pic stolen from the great blog at garveyceyrusselllopes.blogspot.com