Eddie Kazak Was In Demand; But Would He Play?

Eddie Kazak was a third baseman in the late forties and early fifties for the Cardinals and, briefly, the reds. He played so well in just 92 games in 1949 that he made the NL All-Star team, though he didn't come close to that kind of year after that. After a short stop with the Reds, he was sold to the Tigers, who sent him to their Buffalo farm team in 1953.

That is where Kazak's Baseball Reference page ends his transactions, but he played for quite awhile longer, and was dealt quite a bit as well.

“Beaumont's Exporters of the Texas League got third baseman Eddie Kazak and some cash yesterday in a trade that sent pitcher Don Swartz, to Buffalo. Kazak, who played with Houston in the Texas League in 1951, hit .275 the past season with Buffalo. He was the all-star third baseman for the National League while playing with the St. Louis Cardinals in 1949. Swartz had a 14-7 season with Beaumont in 1953.”

Swartz never made the majors, and would finish a decent minor league career with Buffalo in 1954.

Kazak spent just the one year in Texas, then headed to independent San Diego. From the Denton Record-Chronicle of Oct. 13, 1954:

“Eddie Kazak, star Beaumont third baseman, has been sold to San Diego of the Pacific Coast League for $7,500 and a player. Allen Russell, owner of the Beaumont club, said the player, who is not known yet, would be sent here next spring. Kazak, the Texas League all- star third baseman the past season, hit .344.”


I wasn't able to find the player-to-be-named, but Kazak would go on to play 3+ years for San Diego, during which the Indians took the team as their AAA affiliate in the PCL.

In 1958, Kazak ran afoul of Padre manager George Metkovich and was sent to Cincinnati's Seattle club, according to the Arizona Republic of Aug. 14, 1958:


Kazak had refused to play, citing injury. That theme recurred a year later, when he bounced from Seattle to Miami (Baltimore AAA) to Sacramento (Braves AAA) through the season of 1959. The source this time is the Daytona Beach Morning Journal of June 2, 1959:

“Looking for a long ball hitter, the Sacramento Solons yesterday purchased third baseman Eddie Kazak from Miami of the International League. Kazak, 38, was sold to Miami by Seattle a week ago because he refused to play regularly, claiming injuries.”


That covers the last two transactions of Kazak's career as he finished off with a couple games for the Braves' AA team in Austin in 1960. A near-40-year old player in enough demand to find buyers for his services....though he evidently was too hurt to play regularly.

That would get him $10 mil a year these days. 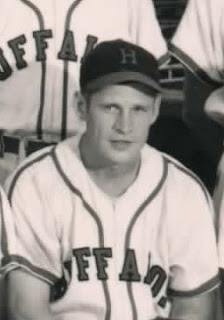 Bob Hall was a pitcher in the majors for the Pirates and Braves in the late forties and early fifties, who put up some less-than-spectacular numbers in the big show.

His entire career spanned from age 18 in 1942 to age 32 in 1956, a lot spent in the PCL. You can look up his record on his Baseball reference register page.

His transaction record barely covers the travels of Hall:

Now I couldn't quite nail down the first go of Hall to Seattle, but it was obvious he was a favorite in that town, with all the efforts to bring him back.


I found a trade to independent Seattle in mid-season of 1951. From the Ellensburg Daily Record of June 1, 1951:

“Bob Hall is coming back to pitch for the Seattle Rainiers.”

“The club management announced that Hall has been obtained from the Boston Braves. He has been playing for Milwaukee in the American Association.”

“To make room for Hall, Pitcher Ray Martin is being sent to Atlanta.”

Martin had been a Brave before and had only been with Seattle for a half of a season. Atlanta was the [Boston] Braves AA club at the time.

Hall had been sent from Milwaukee to Atlanta, though he didn't play for Atlanta, before heading to Seattle again. We get a reason why from this April 1, 1952 article form the Milwaukee Journal:

"Pitcher Bob Hall, one of seven players turned over to the Brewers by the Braves last week, will not remain with the club, [Manager Charlie] Grimm revealed. Hall started the season with Milwaukee in 1951 but lasted only a month. He then joined Seattle, Highly temperamental, Hall is not the Grimm type of ballplayer, and the Brewer manager advised against rejoining the club. He will be sold or traded."

So Hall bounced beck to the Braves from Seattle somehow and they were looking for a way to get rid of him. From the Ellensburg Daily Record of April 8, 1952:

Many articles mention Hall being "obtained" by Seattle from Sacramento during the 1952 season, but I have yet to nail down a date. Nevertheless, Hall was drafted by the Pirates for 1953.

And sold back to the Rainiers very quickly: the May 13, 1953 Beaver Valley Times:

"Catcher Eddie Fitz Gerald was sold to Washington of the American League, pitcher Forrest Main to Toronto of the International League, and pitcher Bob Hall to Seattle of the Pacific Coast League."

“Bob Hall, the 29-year-old righthand pitcher sold back by the Bucs to Seattle of the Pacific Coast League on May 14, has been ordered returned to the Bucs by Ford Frick, baseball commissioner.”

“Purchase of the pitcher by Seattle has been canceled by the commissioner who, in a telegram to Branch Rickey of the Pirates, said the Bucs had received a price in excess of that permitted by league rules.”

Seattle's love affair with Bob Hall didn't end there. Hall didn't make the Pirates the next season and was farmed out to Hollywood in the PCL. Then, from the Pittsburgh Post-Gazette of June 23. 1954:

“Bob Hall, righthanded pitcher who was sent to Hollywood of the Pacific Coast League on a look-see basis, and who was returned to the Pirates a few days ago, was sold to Seattle of the PCL last night,”


Hall would finish in Portland and San Diego in the next two years, but those transactions haven't been found...yet! 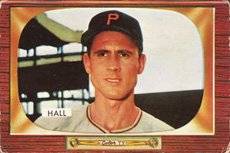 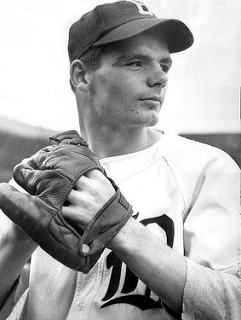