I enjoy looking at team rosters of the past in finding players to feature on this blog, and this time my browser landed on the original Royals team of 1969. I found two players with undocumented transactions.

Billy Harris was an infielder that came from Cleveland in the expansion draft. He played a few games for the Royals in 1969, going 2 for 7 in 5 games. His Baseball-Reference page only lists his time with Cleveland and Kansas City; yet he spent his last year in the pros, 1971, in Indianapolis, a Reds AAA team.

Both mention Harris coming over from Omaha (Royals AAA) in exchange for former major leaguer Jay Ward, who the Royals were looking at as a pinch-hitter. Ward playd 1971 at Omaha, and never played for the Royals.

Steve Jones pitched in 20 games for the Royals in 1969 after spending 1967 with the White Sox and 1968 in the majors for awhile with the Senators.

Jones' Baseball-Reference page only lists transactions up to the Royals' expansion draft, and omits later stops in the Baltimore and Cleveland organizations. Jones threw in 40 games for Omaha in 1970, then spent the last part of the season in Rochester.

Brian A. Bennett’s “On a Silver Diamond” , a great source for minor league information, has the mention that Baltimore purchased Jones from Omaha in July.

I couldn't track down his 1971 switch to the Cleveland organization. 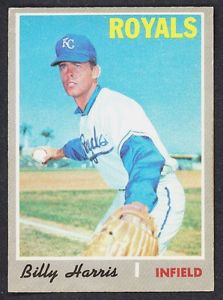 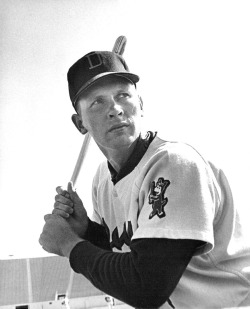 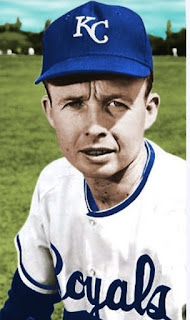 Harris from eBay, ward from Tumbler and Jones lifted from Pinterest.