Jerry Scala Was No Jok

Jerry Scaia was a centerfielder for the White Sox from 1948-50. He continued until 1955 bouncing thru quite a few organizations. However, his Baseball-Reference page only lists unknown deals before he surfaced with the Sox. He was involved in a few interesting transactions after that, and we were able to track many down.

Scala had a good shot at starting with the Sox in 1949 and came up a bit short. He was optioned to the Pirates' Indianapolis club, and was involved in a complicated trade that saw him bounced from Chicago to independent PCL team Oakland and back. From the Indianapolis Star of June 12, 1949:


"Earl Rapp, outfielder for the Chicago White Sox, has been sold to the Oakland Oaks in the Pacific Coast League, the White Sox office announced today. The deal supersedes one announced last Thursday which would have sent Sox Outfielder Jerry Scala and First Baseman Gordon Goldsberry to Oakland in trade for George Metkovich, Oaks outfielder. However, Scala will stay with the Sox and both Rapp and Goldsberry will go to the Oaks."

Scala played for the ChiSox and AAA Buffalo on option in 1950, and Sacramento for Chicago in 1951. Then he goes to Baltimore, AAA for the Phillies. The Feb. 24, 1952 Baltimore Sun describes Scala as having come from "Sacramento in a trade that sent Bill Glynn to that club." Bill Glynn is covered in, I believe, two other UT blog posts.

"Gerry Scala. announced as signed by the Ottawa Athletics last-night is the leading choice to play centre field on the 1953 edition of the dub. Scala, who has said he's anxious to come here, was with the Baltimore Orioles last year, where he batted .240 while playing in centre. The A's obtained the 27-year-old outfielder in a trade tor Stan Jok earlier this Winter."

And, Jok's Baseball-Reference page simply has this as an unknown transaction.

Scala stayed with the Athletics thru the end of his playing days in 1955. 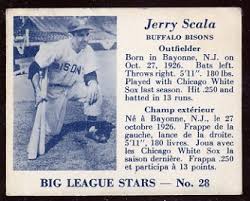 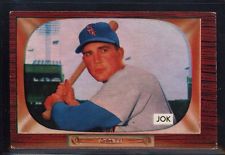 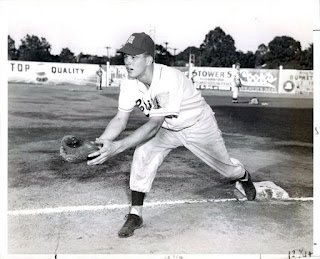 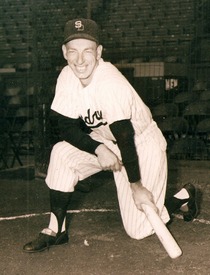 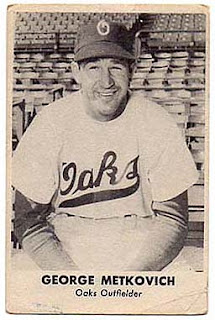 Scala from Stars of the Diamond.com

Catcher Jim Mangan made the major leagues with the Pirates and Giants, but didn't perform at the plate particularly well. His Baseball-Reference page shows a .153 average over 67 PA spread out in the years 1952, 1954 and 1956.

He didn't get along well with his higher-ups, either. Reports are he blew up at Branch Rickey while on Pittsburgh's roster in 1955, which sent him to Hollywood for the season, then optioned to independent El Paso. It was from there that he was sold/waived to the Giants for 1956, that transaction is on his Baseball-Reference page.


Mangan didn't think much of Bill Rigney's management style (Mangan had managed at El Paso in 1955) and got himself suspended. From the Aug 14, 1956 Billings Gazette:

"Jim Mangan, third string catcher of the New York Giants, who said Manager Bill Rigney "is the worst manager I ever played (for)" Monday was was suspended indefinitely by Club President Horace Stoneham "Mangan is suspended as of today until further notice hecause of his act in leaving the club at Pittsburgh," Stoneham's notice read. No mention was made of the 25-year-old sub's reason to newspapermen. Mangan, who was purchased from Pittsburgh, left at the end of the 2nd inning of the first game of a doubleheader with the Pirates, telling Rigney he could not "stand it any more." He stayed away from the park during the entire second game but returned to New York with the team. The San Franciscan has seen little action this season. Bobby Bragan, manager of the Pirates, said "This follows a pattern. This fellow told off Branch Rickey last year." Following this blowup, Mangan, who was owned by the Pirates and was playing for Hollywood in the Pacific Coast League, was sent down to El Paso in the WestTexas-New Mexico League. Mangan batted .245 for Holly- wood last year."

Mangan never played in the majors again, and came back in the season only to be used as a bullpen catcher for the Giants that year. In 1957, Mangan goes to the Sacramento PCL independent team in a deal not on his Baseball-Reference page.  From the Pasadena Star-News of March 23, 1957:

“Sacs Buy Receiver From N.Y. Stormy Catcher Jim Mangan today became Sacramento's headache as the Solons' front office announced that he has been purchased for an undisclosed sum from the New York Giants. Mangan is the boy who called Bill Rigney, New York Giants skipper the worst manager n baseball last year and left the club in a huff, was suspended and eventually was allowed to rejoin the team and used in the bull pen only. This spring Mangan, who formerly played with Hollywood and had a few run-ins, as well, was assigned to Minneapolis, the Giants' farm club, now training at Stanford, Fla. Mangan will stop at Minneapolis to pick up his car and drive to Pasadena, being ex- pected next week. He played in 20 games for New York and hit .100.”

Mangan played sparingly for the Solons as third string catcher, then went to AA San Antonio and the Orioles system in 1958 despite going to spring training for the Solons. There is evidently one game for Fort Worth and the Cubs system in 1957 that I can't track down.

One thing about the majors back then, if you hit less than .200 and criticized management, your career tended to disappear. 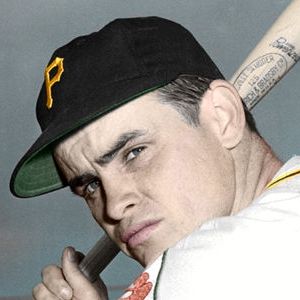 Bob Wiesler Walked Back to the Yankees

Bob Wiesler was a pitcher in the fifties for the Yankees and Senators, best known for being a roommate of Mickey Mantle and for his ability to walk opposing batters.

Wiesler's Baseball-Reference page lists a single multi-player trade for his transactions after his initial signing by the Yankees, which sent him from the Yanks to Washington.

However, Wiesler's career continued until the 1961 season, and saw him go from the Senators to the Yankees system again, followed by the Twins and Angels in 1961.


He goes from the Senators to Richmond (Yankees system) in both 1957 and 1958, and I cannot find these deals anywhere. But he is certainly Yankees property again by 1959, as he is in spring training with the big club, sent to Richmond in an article from the News-Herald from Franklin, PA of April 2, 1959:

Wiesler stayed with Richmond until just before the 1961 season, when he headed back to the former original Senators, now the Twins, and their Syracuse AAA club. From the Progress-Index from Petersburg, Va of April 11, 1961:

“The Vees did some cutting yesterday, and among those sent away was veteran lefthander Bob Wiesler, who was sold to Syracuse. He has been with the Vees since 1957.”

"Vees" was short for Virginians, the Richmond team nickname.

Wiesler's return to the Senators/Twins system was short-lived, one two-inning, 3-walk, 5-hit, 4-earned-run performance. From the Syracuse Post-Standard of April 25, 1961:

Weisler finished the season at Dallas-Fort Worth, an Angels minor league team, but I could not find the signing date.

If anyone can fill in the blanks for Wiesler's moves between Richmond and Washington, let me know! 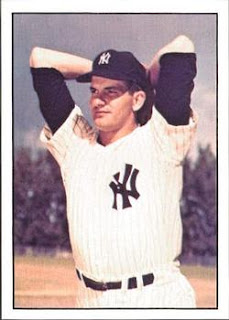