Big Jim Fridley was an outfielder for the Indians, Orioles and Reds and several minor league teams in the fifties. Ben Flowers pitched for quite a few teams in the early fifties.

Between stints with Baltimore in 1954 and the Reds in 1958, Fridley was involved in a few transactions, as noted on his Baseball Reference major league page.

That certainly looks funny and very uncharted. But thanks to the Fairbanks Daily News-Miner of May 24, 1957,  we can unravel one of these transactions:

"Los Angeles announced the acquisition of outfielder Jim Fridley from Denver of the American Assn., in exchange for pitcher Ben Flowers, who was 1-4 with the Angels this year. Fridley has lit .313 for Denver this season."

Los Angeles was a Dodgers AAA team, and Denver a Yankees AAA team. Flowers' Baseball Reference major league page has no mention of the deal at all.

Haven't cracked the other two Fridley deals yet!

Next time, a debt gets paid in a previously Unknown Transaction! 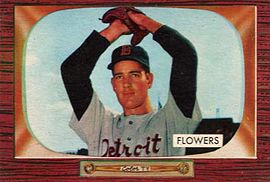 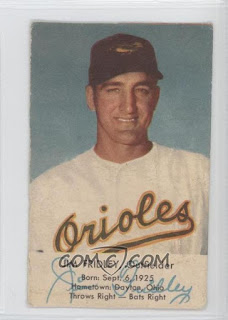 Flowers from Wikipedia, Fridley from COMC.COM

Bob Hooper was a pitcher in the majors in the early fifties with the Athletics, Indians and Reds. He won 15 games for the 1950 Philadelphia club despite an ERA over 5, and was 12-10 in 1951, but he walked more people than he struck out and was in the minors for good again in 1956.

Hooper was on the 1954 AL Champion Indians, but didn't play in the postseason.

In 1955, Hooper was purchased at the beginning of the year by the Reds from the Indians. He got off to a bad start (0-2 and a 7.62 ERA) and was off to the minors....but it was the Indianapolis club he went to, back in the Indians organization.

How did that happen? No mention on his Baseball Reference major league page. So we turn to the Logansport Pharos-Tribune of May 17, 1955 for the answer:


"Indianapolis Club Buys Bob Hooper INDIANAPOLIS (UP) -- General manager Eddie Stumpf today announced the purchase of right- hander Bob Hooper from the Cincinnati Redlegs to bolster Indianapolis' sagging pitching staff. Hooper's best year in the majors was in 1950,. 15-10 with the Philadelphia A's. He was with Cleveland the past two seasons before being waived out of the American League. At Cincinnati, he compiled a 0-2 mark this spring, giving up 20 hits and 11 earned runs in 13 innings."

Hooper would stay just that season with Indianapolis before heading to Vancouver and the Orioles system. I have not been able to track that transaction down. Can you? 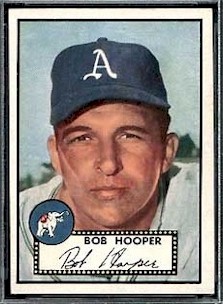 Mr. Hooper from
1952toppsbaseballcards.com
Posted by Eric C. Loy at 5:06 AM No comments:

Windy McCall is best known as a New York Giants relief pitcher, part of the great 1954 World Champs. He stayed on for a couple of years, but wore out his welcome with the Giants in 1957 squabbling with the manager.

His Baseball Reference major league page   doesn't mention how he got to head to AAA San Francisco (Boston system) and then Miami later in his career, but we can fill in a couple holes.

The last Seals team was glad to have him, but he didn't have a good enough record for them and he was sent to Miami.


“That long-sought lefthander, John (Windy) McCall, was purchased from the Boston Red Sox today by the Miami Marlins for a price that would lift the bonded debt of a fair-sized banana republic.”

Miami was with the Phillies at that time. McCall pitched well enough for the Phillies  to invite him to 1958 spring training, but he was optioned back to Miami before the season started.

McCall was with Miami in 1959, in the Orioles organization, and Seattle in the Reds organization. Haven't found the deal there yet. 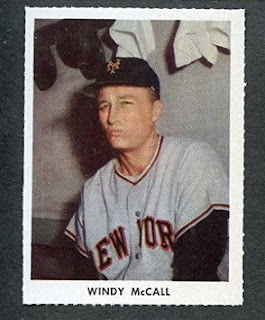 McCall pic taken off of amazon.com

Frank Kellert was a first baseman in the majors with the Browns and Orioles, Dodgers and Cubs from 1953-1956. He hit .325 as a backup to Gil Hodges and pinch hitter for the Dodgers in 1955, and was 1-for-3 in that year's World Series. Sent to the Cubs the next year, he didn't perform nearly as well, and finished his career in the minors.

Kellert's Baseball Reference major league page reflects a few trades that happened while he was in the minors...

Kellert had finished the 1958 season with Minneapolis in the Red Sox organization, then was sold to the Reds and Seattle.

Malmberg spent a very short time in the majors, and this is a previously undocumented trade for him as well.

Back to Kellert, during the 1959 season, he went to Baltimore's AAA Miami team.

“Yesterday the club announced the purchase of first baseman Norm Zauchin and pitcher Vito Valentinetti from Washington of the American League and first baseman Frank Kellert from Seattle.”

"The club" being the Miami Marlins. The Zauchin and Valentinetti deals are previously known.

So we can close the book on the Frank Kellert Mysteries! 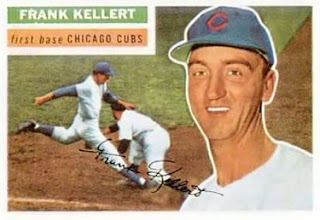 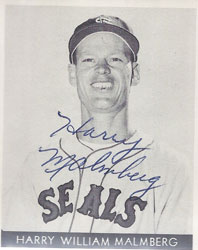