You can't get enough McNultyMania!

In our last post we looked at the transaction career of Bill McNulty, and found several holes. We have now found an apparent mistake in a transaction listed on a few internet sites.

Some of them have McNulty being sent as part of a late 1971 deal that sent Adrian Garrett from the Cubs to Oakland for catcher Frank Fernandez, but we have uncovered an article in the Salt Lake Tribune that seperates the McNulty transaction from that trade. Quoting the article:

"When Tacoma lost Adrian Garrett, the league's top homerun hitter with 43 and a 119 RBI man to Oakland in a deal Wednesday, Tacoma purchased McNulty (.249 and 25 homers) from Oakland's farm in Iowa of the American Assn. Bobby Adams, general manager of Tacoma, said the Cubs'got special clearance to use McNulty in the series since they lost Garrett"

So Tacoma purchased McNulty AFTER the trade. Also, McNulty didn't play in the regular season for Tacoma, only postseason.....he was in Evansville in 1972.

The Bend (OR) Bulletin of Sept. 3. 1971  has a small recap of one of the playoff games. McNulty homered in a loss...and it mentions his being acquired two days before the playoff series.

McNultyMania running wild!
Posted by Eric C. Loy at 5:53 AM No comments:

The Strange Cases of Bill McNulty

Bill McNulty made a couple stops in the majors with the Oakland team in the late sixties and early seventies...but he was a frequent flier when it came to transactions. His Baseball reference page, however, only lists his draft, a 1972 trade to the Rangers, and a trade to the Mets.

The book "One Hit Wonders" by George Rose goes more in-depth into the slugger's dealings here,

It mentions a trade of McNulty to the Brewers in the offseason before 1971, and the A's buying him back before the season started.

The Cubs are said to have "purchased" McNulty after the 1971 season, and they sent him to Evansville (strangely, the Brewers AAA team). They "gave" him back to Iowa after the season.

Finally, the book mentions that McNulty wanted to play for his hometown club in Sacramento, a new team and an affiliate of the Brewers. It has the Mets and Brewers "able to make a deal" for McNulty to head home.

So, it looks like possible FIVE transactions not documented for Mr. McNulty. Time to go to work! That takes care of one of the unknown transactions, can you help with the rest?
Posted by Eric C. Loy at 4:36 AM No comments:

Looking up utilityman Ted Kazanski's stats, we find that he went from the Milwaukee organization in 1963 to the Yankees in 1964, but no transaction info is listed. Off to Google!

And we find this article...

Stating that Kazanski was obtained by Richmond (Yankees AAA) from Toronto (Braves AAA) for pitcher Bill Kunkel in the offseason between 1963 and 1964. Success!

A check of Kunkel's record shows that he indeed went to Toronto in 1964. Both of these players have a couple more undocumented stops in their careers, can we find out more? 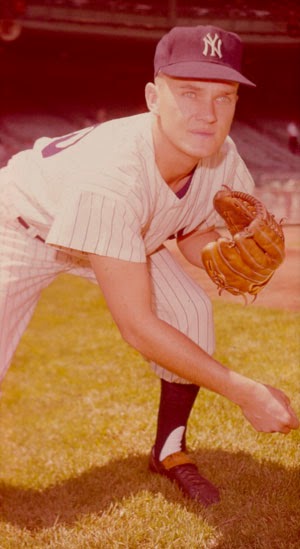 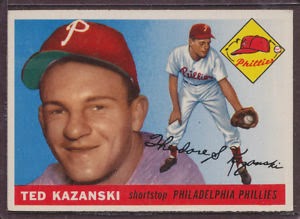 This article mentions that Kazanski and Hersh were purchased from the Braves by Toronto (Cleveland AAA) on May 20, 1960 for $25,000.

In looking around Baseball-Reference.com, I noticed that pitcher Ron Locke spent his entire career in the Mets organization...except for 1966. He takes a bit of a journey to the Reds and Phillies minor leagues before returning to the Mets for several years.

Smelling a transaction, we hit the Google search and came up with the following article from the Montreal Gazette of May 24, 1966:

Which states Locke went from Jacksonville (NY AAA team) to Buffalo (Reds AAA team) the day before as part of a deal involving Gerry Arrigo! Score!

The Retrosheet transaction lists the Arrigo move to the Mets as:

So we now know that Locke was a part of that deal.

Now we look for his trip to Macon that year, and his return to the Mets in 1967. 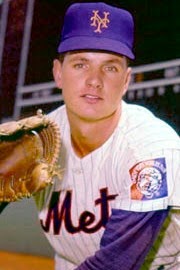 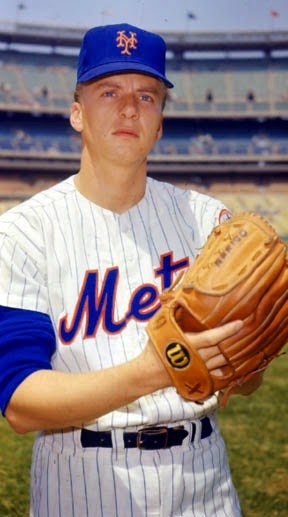 Locke and Arrigo taken from the www.ootpdevelopments.com
website.
Posted by Eric C. Loy at 5:51 AM No comments:

Derrell Griffith to the Braves in 1967...looking for clues

This is one example of what we are looking for in trying to fill in the transaction history of major league baseball players.

We know that Griffith was traded to the Astros by the Mets (after a trade from the Dodgers) in the 1966-67 off-season.

What we DON'T know is how he ended up in the Braves organization just after the 1967 season started.

I've found plenty of stories on Griffith in games for Oklahoma City in 1967 and a couple on him playing for Austin later, but nothing bridging the gap.

This article talks about the 1968 Atlanta Braves spring training non-roster invitees, of which Griffith one...

" Derrell Griffith, who has keen(sp) in the big leagues with the Dodgers and came to the Braves after the '67 season started from the Mots(sp)"

Which we know isn't quite right..the MOTS traded Griffith to the Astros, who parked him at AAA Oklahoma City before his travels to the Braves system.

Can you connect these dots? 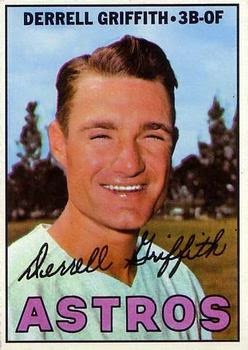 Filling In Some Baseball History

Welcome to the new blog...

I hope to eventually re-start my 1973 TOPPS FOOTBALL blog when my scanner is back or re-attached.

For now, I'd like to see if we can help baseball chroniclers fill in some holes.

If you have ever used the great sites Baseball-Reference.com and Retrosheet, you have probably noticed a few listings of players with "unknown transactions." Some of these mysteries can be solved if we look through the net or local libraries, through articles, biographies, and newspapers.

I've been able to find a few that I've forwarded to Retrosheet...but there are many many more. For example:

Ron Nischwitz, a pitcher in the Sixties, finished his career with Jacksonville in the Mets system. Why?

There is no transaction listed for him to go from the Detroit system to the Mets system. So I go to Google and start typing...I find this page:

The April 14, 1966 Spokesman-Review newspaper! Which has an article explaining that Nischwitz was being sent to Jacksonville after the Mets purchased him over the winter.

This transaction is not listed on Retrosheet! So we have helped find some history.

Let's do some good and fill some holes.