Marino Pieretti maybe better known for what he did after his playing career than his pitching during it.

He broke into the majors in 1945 with the Senators, having been drafted from PCL Portland. IN that rookie year, he went 14-13 with a nice 3.32 ERA, allowing just 3 homeruns in over 233 innings!
The next few seasons didn't go quite as well for Pieretti, and he went to the White Sox and finally Cleveland in 1950. Pieretti's major league Baseball reference page stops there, but he was far from done pitching.


Cleveland sold Pieretti back to Portland (by then independent) for 1951. From the St. Petersburg Times of Jan. 15 1951:

“The Cleveland Indians Saturday (Jan. 13) announced the sale of Pitcher Marino Pieretti to Portland of the Pacific Coast League.”


Pieretti thrived again in Portland, he had won 26 games for them back in 1944, and he won 34 games over two seasons this time around. For 1953, he was sent in a deal involving four former major leaguers to Sacramento. The Eugene Register-Guard of May 8, 1953 had an article on the trade, and a hitch that caused some higher-ups to step in:

“George Trautman, minor league boss, ruled Thursday that Portland has a player coming from the Solons because of the retirement from baseball of Orval Grove. Grove, a pitcher, was traded to Portland along with Glenn Elliott for Joe Brovia and Marino Pieretti. But he quit baseball before he reported to the Portland camp.”

Grove did indeed retire, and I couldn't find who was sent in his place.

Pieretti continued to pitch well in the PCL, winning 12, 16 and 19 games for the Solons, when the Majors came calling. From the Sarasota Journal of Dec. 2 1955:

“Right-handed pitcher Mario Pieretti, 34, of Sacramento in the Pacific Coast League has been purchased by the Philadelphia Phillies for an undisclosed sum.”

"The Solons obtained on option from the Philadelphia Phillies lefthanded pitcher Ronald Mrozinski as part of the sale price for hurler Marino Pieretti.”

But for Pieretti, he would never see the regular season field for the Phils. From the Albuquerque Journal of April 20, 1956:

“Righthanded pitcher Marino Pieretti, who won 19 games for the Sacramento Solons last year, was returned to the Pacific Coast League club Thursday by the Philadelphia Phillies. Dave Kelley, Solon personnel manager, said he was informed of the move by Roy Hamey. Phils general manager. Pieretti went to the Phillies in a conditional sale last fall.”

The Solons were done with Pieretti, and sent him quickly to Los Angeles. One day later, in fact. From the Santa Cruz Sentinel of April 22, 1956:

"The Sacramento Solons. of the Pacific Coast league yesterday announced the sale of righthanded pitcher Marino Pieretti to the Los Angeles Angels. Pieretti won 19 games for Sacramento last year. The price was not disclosed.”

Pieretti didn't have the greatest season, and was doing a lot of coaching in L.A., which he continues through some lower minor league stops and locally in California for years. The Italy-born Pieretti was quite a beloved figure and it would behoove you to look up what he was able to do for younger players. 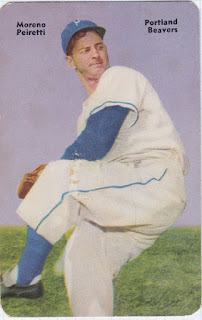 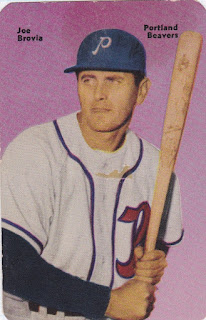 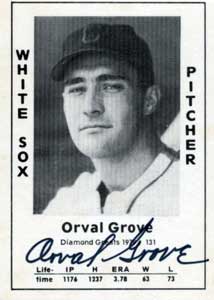 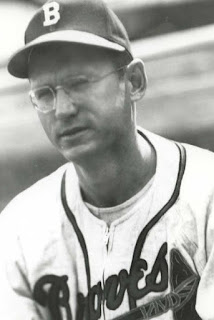 Badly misspelled Pieretti and Brovia both from richardleutzinger.com

Mrozinski from www.phillysportpast.com
Posted by Eric C. Loy at 7:04 AM No comments:

Chet Laabs was a solid outfielder in the AL in the late thirties through the forties with the Tigers and Browns before a short Athletics stay in 1947 ended his major league career.

His Baseball Reference page mentions his purchase by the Athletics from the Browns, but not why Laabs ended up the 1947 on Detroit's AAA team in Buffalo.

This article in the July 8, 1948 Milwaukee Journal doesn't give us an exact date as to when a deal happened, but it does give us the reason Laabs was shuffled to Buffalo:


“One year ago Chet Laabs was railroaded out of the majors. Buffalo bought him for $10,000 from Connie Mack’s Philly A’s.”


Laabs was quite a homerun belter in that day, and he was doing the trick for Buffalo, leading to the "railroaded" editorial comment above. In reality, the then-35-year-olf Laabs had gotten off to a bad start with the A;s in 1947, hitting just .219 in 15 games.

After a few good productive years in Buffalo, Laabs was sent to the Toronto club in 1949. From the
July 8, 1949 Ottawa Journal:


“Toronto Maple Leafs of the International Baseball League announced yesterday outright purchase of outfielder Chet Laabs from Buffalo Bisons. Terms were not disclosed. Laabs. 35-year-old former major leaguer who played at one time with St. Louis Browns, Detroit Tigers and Philadelphia Athletics of the American League, batted .295 for Buffalo last season and drove in 81 runs. He bats and throws right-handed. Laabs will be on deck for tonight's Leafs-Rochester Red Wings game at Toronto.”

Laabs made one more AAA stop, Jersey City in 1950, but I haven't been able to find anything on that move. If you do, feel free to finish off this tale! 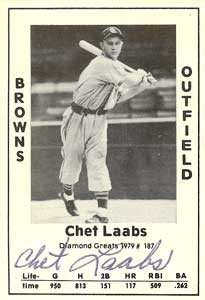