Hello again! Physical woes continue to conspire against my putting up post more often, so we will go with an easy one today: Gordon Jones.

Jones was a journeyman pitcher who debuted with the Cardinals in 1954 with a nice partial season, a 2.00 ERA and a couple shutouts, then settled into a bullpen role for a few teams into the sixties.

Jones travels from the Orioles organization to the Athletics in 1961, and his Baseball Reference page lists just the following:

November, 1961: Purchased by the Kansas City Athletics from the Baltimore Orioles.

Not a whole lot of explanation there. We are able to find this from the Oct. 3, 1961 Eugene Register-Guard:

....The Beavers bought his contract from Rochester of the International League."

Portland being an A's affiliate and Rochester with the Orioles.

So we can put the date of the purchase as Oct. 2 or 3, a month earlier than listed. He moves on the Oklahoma City in 1962 in another interesting deal I haven't been able to track down.

As we get moving around, more to come. Thank you! 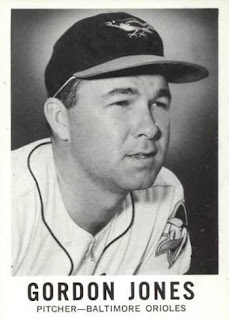 Sorry we have been out for awhile, health and work issues got in the way.

Al Benton was a solid major league pitcher from 1934 to 1952, was an All-Star a couple of seasons, received some MVP votes a few times, and had three scoreless appearances for the Tigers in the 1945 World Series.

His Baseball Reference page mentions a few deals in his career, but I think we have uncovered a few more, and some possible corrections.


Looking these up, that doesn't seem quite right.  The April 20, 1949 Newark Advocate has this:


"Indians Buy Benton CLEVELAND. April 20---- The Cleveland Indians last night announced the purchase of Alton Benton. right hand pitcher from Sacramento of the Pacific Coast League. The purchase price was not announced. Fred Marsh, a reserve infielder. was optioned to Sacramento as part of the deal."

Now, Sacramento was an independent club at the time, not a Tiger affiliate. His clean break from the Tigers is reaffirmed by this from the Aug. 17, 1949 Decatur Herald, about a Benton game against the Tigers...

"It was Benton's first start against the Tigers, who released him unconditionally last fall."

So it looks like he wasn't re-signed by Detroit at all.

Benton was back in AAA in 1951, sold to Sacramento. He goes to San Diego here:

"At the same time, it was learned that the A’s had failed in their bid for Al Benton, former star relief pitcher of the Detroit Tigers. The big veteran, released earlier this week by Sacramento, has caught on with San Diego and pitching in relief for the Padres last night."

The A's in the article were the Victoria A's, and the item is from the well done WIL Baseball-1951 Blog by WIL FAN. Check it out please.

Baseball Reference has this for his return to the majors in 1952:

But an interview with former major league pitcher Harley Hisner in the great Baseball Happenings blog....(thanks to N. Diunte!)

“In 1952, they were making a relief pitcher out of me,” he said. “In the first week in July, Boston needed a relief pitcher. San Diego had one. Boston always had a verbal agreement with them. They traded me and Al Richter to San Diego for Al Benton.”

That is quite different than a straight sale. Benton did well at age 41 with Boston, but went to San Diego to finish his career the next year. From the San Mateo Times of  Jan, 9, 1953:

A long, solid career for Benton. 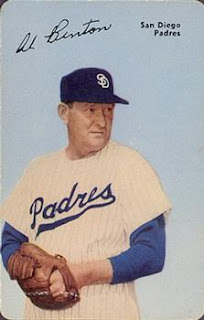 Tony Roig had an extremely long career as a professional baseball player. Starting with Troy and Lafayette at age 20 in 1948, he played until 1968, his last year of six in Japan.

His major league career consisted of just three partial seasons with the Washington Senators. After the 1957 season at Chattanooga, the Senators' AA team, he was drafted by the Dodgers and stashed at Spokane for three years.

His Baseball Reference entry ends his transaction history there, but he went to the White Sox organization for a couple years before heading to Japan. We were able to track that transaction down, in two parts...

“Yesterday, at the major league draft meeting in Louisville, Spokane lost five players, two of them 1960 regulars, to major league clubs. Infielder Tony Roig was drafted by the White Sox and pitcher Ray Semproch to the new Washington club in the American League.”


Okay. Both Baseball Reference and Retrosheet have the Semproch drafting, but not the Roig one. How did he get to San Diego?

“...the Chicago White Sox, who drafted Roig from Spokane last winter, announced Wednesday he has been sold to the San Diego Padres, White Sox farm club in that loop.”

Roig transferred to the Indianapolis ChiSox farm team in 1962, then to Japan the next season.

I wonder why his being drafted by Chicago wasn't listed? 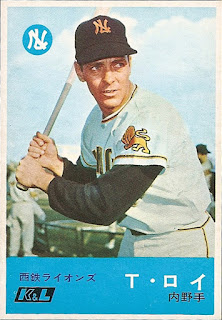 You should go there and read it all.

Big Ed Stevens was a slugging first baseman for the Brooklyn Dodgers and Pittsburgh Pirates in the late forties and into the fifties, but his baseball career continued for many more years in the high minors.

His Baseball Reference major league page ends his transactions with the move from the Dodgers to the Pirates. In 1950, after hitting below .200 in the bigs, Stevens was sent to the Pirates AAA team in Indianapolis. He played the entire 1951 season there, and in the meantime, became Cleveland property when the Indianapolis franchise switched affiliations.

“Toronto Leafs Buy Ex-Buc Ed Stevens  TORONTO, April 3 Toronto's Maple Leafs of the International League have bought First Baseman Eddie Stevens from the Cleveland Indians, Owner Jack Cooke said yesterday. Stevens, 28, played with the Montreal Royals five years ago and was, with Indianapolis in the American Association last season. He played in the major leagues With Brooklyn and Pittsburgh.”

Stevens would enjoy five years in Toronto, and even had a radio show. You can find out a lot more about Ed Stevens in his book, "The Other Side of the Jackie Robinson Story," he has some great history recorded there.

Stevens said in his book he was sad to leave Toronto for Charleston, but Charleston was happy to have him. From the April 4, 1957 Raleigh Register:

“The Senators received good news yesterday despite the fact they dropped a 2-0 decision to the "Birmingham Barons. Lefthanded Ed Stevens was purchased from the Toronto Maple Leafs to fill the gap at first base. Stevens is expected to report today. He formerly played in the National League for Brooklyn and Pittsburgh. Last year, he hit .257 for Toronto, jamming 21 home runs, 12 doubles and a triple. He had 73 runs batted in during the 140 games in which he played.”

Stevens would only play part of one season with the Detroit affiliate before going to Rochester and the Cardinals organization to finish the season. The only note of this I could find was from Brian A. Bennett's wonderful "On a Silver Diamond" series:

"First baseman Ed Stevens was likewise acquired, from Charleston of the American Association, where he had 17 home runs."

Stevens stayed in Rochester for another season, then went to Dallas and two AA teams in 1959. 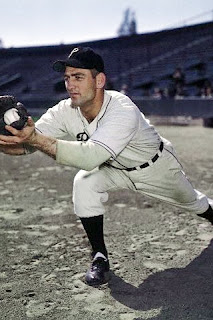 Gene Bearden: A Knuckler in a Whirlwind

Gene Bearden is best known for his great performance for the World Champion Cleveland club in 1948, going 20-7 as a rookie pitcher and beating the Red Sox in a playoff, then winning and saving one in the World Series.

His career didn't finish with such a flourish in the majors, and he went from the Indians to the Senators, Tigers, Browns, and finally, the White Sox in 1953. His Baseball Reference page lists the move from the Browns to the Sox as:

March 18, 1953: Selected off waivers by the Chicago White Sox from the St. Louis Browns.

But the Daily Independent Journal of Feb. 10, 1953 has something a little different:


"Veteran Pitcher Gene Bearden was sold Wednesday (Feb. 9) by the St. Louis Browns to the Chicago White Sox for an undisclosed amount in excess of the waiver price."

Bearden was pretty effective for the ChiSox, but evidently not effective enough, as he was traded to the PCL.

"Gene Bearden, former Cleveland Indian pitcher, Saturday was acquired by the Seattle Rainiers of the Coast League in a deal that sent shortstop Alex Garbowski and pitcher Art Del Duca to Charleston of the American Assn.”

Charleston was the White Sox AAA team in 1954. Seattle was independent.

Bearden was sent away with many other Seattle players right before the 1955 season as Manager Fred Hutchinson decided to clean house. The book "The San Francisco Seals, 1946-1957: Interviews with 25Former Baseballers" by Brent P. Kelley spells out the process, but doesn't give out the exact details of how Bearden got to San Francisco, another independent PCL club at the time.

Bearden then became property of the Red Sox, when the BoSox bought the San Francisco ballclub. From the Nashua Telegraph of Nov. 29, 1955:

"In addition to the franchise, the Red Sox acquired the contracts of 19 players, including veterans like Gene Bearden, Wally Judnich and Bill Serena….who have had a whirl in the majors."

He didn't stay in the Red Sox system for long, as the Braves bought his contract...from the Milwaukee Journal of Feb. 28, 1956:

“Just 10 days ago the Braves bought him conditionally for their Wichita farm club with the promise that he would be transferred to the varsity if his showing warranted.”

The article has many quotes form Bearden as to how he had matured as a person, and from Braves management saying he had a good chance of sticking with the club out of spring training. He didn't.

"Former San Francisco Seals pitcher Gene Bearden, who has been working out here with the Milwaukee Braves, has been released by the major league club and assigned to Sacramento of the Pacific Coast League."

Other articles have him assigned by the Braves there, though Sacramento was independent at the time. Bearden stayed the full season there, then requested a trade in the off-season. He recanted that later, but was dealt partway into the 1957 season to Minneapolis in the Giants' organization.

"Sacramento announced the acquisition of outfielder Edward Perry White from Minneapolis of the American Assn., in exchange for outfielder Jackie Tobin, veteran pitcher Gene Bearden and an undisclosed amount of cash."

Bearden would end his career in Minneapolis.

Whew! What a whirlwind! And so many players that had been in the majors.

If you can add to this list, or any other entry to the blog, feel free to do so! 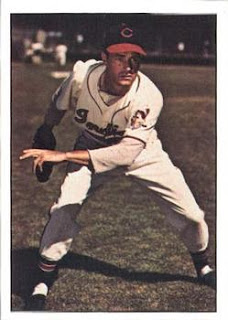