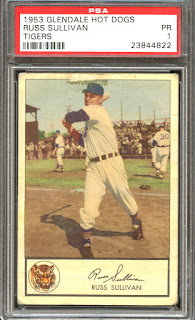 Russ Sullivan was an outfielder for the Detroit Tigers in the early fifties, posting a nice .267 lifetime average, with a .357 OBP and some power in just 150 at-bats.

For some reason, Sullivan couldn't stick with the big club, and he spent all of 1954 in AA Little Rick for the Tigers organization. Russell's Baseball-Reference page has only his signing by Detroit in his list of transactions, but he took a couple of trips after that 1954 season.


"Russ Sullivan, purchased by the Hollywood Stars of the Pacific Coast League from Little Rock of the Southern Assn. last month, has been claimed on waivers by the Portland Beavers of the PCL, it was announced today."

So Sullivan is bought by Hollywood in Dec. of 1954, then waived away to Portland in January. Odd.

Sullivan didn't stay in Portland very long, partway through the season he was sold to the IL. From the


"Outfielder Russ Sullivan was sold to Columbus of the International League…”

Sullivan was a productive player for Columbus, in the Athletics' system in 1955 and 1956, and the Pirates organization in the early 1957 season. The then-34-year-old outfielder, still a solid hitter, was dealt back to the Kansas City system, and AAA Buffalo. This article sang his praises in the Free Lance Star of Aug. 24, 1957:

“Russ Sullivan, who joined Buffalo two weeks ago, is one of the big reasons why the Bisons have regained first place in the International League race."

"The 31-year-old veteran outfielder was purchased from the Columbus Jets Aug. 9…”

Baseball-Reference says he was 34! Either way, Sullivan's career ended on a high note, with an overall .314 average for both of the teams in 1957. Lifetime, he was a .310 minor league hitter, which leaves us wondering why a major league team didn't give him a longer shot.

Let's do a couple more one-shots:

Bud Zipfel was a slugging first baseman who was very young when the Senators brought him up for parts of the 1961 and 1962 seasons. His Baseball-Reference page lists a few transactions for Zipfel, but ends after 1960.

Zipfel went to training camp with the Reds in 1963, but never made it back to the majors.
----

Bob Dillinger was a very good third baseman in the late forties who put up batting averages of .321 and .324 in the 1948 and 1949 seasons for the Browns. In 1951 he was sold by the Pirates to the White Sox, and Dillinger hit .301 for Chicago the rest of the way. After that season, Baseball-Reference has him going to independent Sacramento of the PCL to finish his career, but doesn't give the how. I found how in the Toledo Blade of March 25, 1952:


“Third baseman Bob Dillinger, who carried a $125,000 price tag two years ago, has been sold by the Chicago White Sox to the Sacramento Solons for $10,000 and a player yet to be named.”

By the way, Dillinger finished his major league career with a .306 batting average, and naild PCL pitching for a .366 average over 170+ games in 1953! 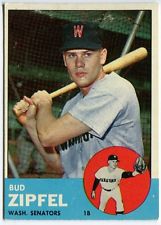 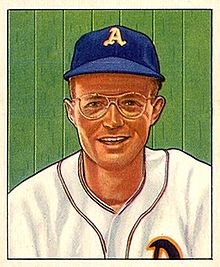 Zipfel from eBay
Dillinger from Wikipedia
Posted by Eric C. Loy at 7:20 AM No comments:

Bill Glynn played first and the outfield for the Philadelphia Phillies and Cleveland Indians in the late forties and early fifties.

An excellent fielder at first base, Glynn couldn't quite keep his bat hot enough to stay in the majors, and after helping the Indians make the World Series in 1954 (in which he was 1 for 2), he was sold to Indianapolis, the Cleveland AAA team.

Glynn went from there to the west coast, in a couple of trades not documented on his Baseball-Reference page.

Glynn hit very well in Indianapolis for the first part of the season, but the parent club sold him to the PCL Seattle Rainiers independent team midway thru the season, as noted here in the Indianapolis Star of May 12, 1955:


“The Cleveland system announced late yesterday that (Joe) Altobelli, a first baseman, is being sent back as of today and that Bill Glynn has been sold to Seattle of the Pacific Coast League for an undisclosed price,”

Altobelli was going to Indy and Glynn was going west.

The next year, Seattle became a Cincinnati farm club. Though Cleveland had more or less dumped Glynn off in 1955, by 1957 the Cleveland AAA team in the PCL, San Diego, made a move to get him back in the fold. From the Pasadena Independent of Aug. 13, 1957:

Federoff, another former major leaguer, we will cover in a later blog.

Glynn was with San Diego through 1958, when reportedly he was traded to Birmingham of the Southern League, balked, and retired. I couldn't find the newspaper article to back that up, but SABR has a great biography of Glynn and mentions the deal.

There is another unknown transaction that comes in 1952 where Glynn goes to independent PCL from the Phillies organization before Cleveland buys him, but, again, I could not find the details. 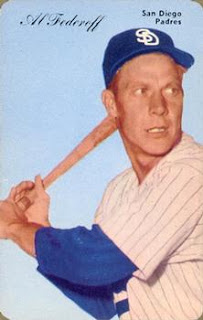