Jim Kirby was an outfielder during the World War II years that had a very brief stay with the 1949 Cubs, one hit in two at bats over three games without playing in the field.

He had a long career in the minors, starting in 1942, skipping three years for the war, then coming back to C ball in Tyler, Texas. He graduated to AA independent Shreveport in 1947 and 1948 with a couple nice years, good enough to be drafted to the Cubs for 1949, according to his Baseball-Reference page.

After his short major league stay, the Cubs optioned him to their AA Nashville club (Kirby's hometown) and then to independent AA Dallas later in that year. Baseball-Reference lists no further deals for Kirby, be we were able to uncover a few.

Kirby stayed at Dallas for 1950, having been purchased by the club, according to the Nashville Tenneseean from Sept. 7, 1949:


"The Dallas club of the Texas league yesterday announced the purchase of Outfielder Jim Kirby from the Chicago Cubs. Kirby played here this season but was with Dallas on option."

Dallas became a Cleveland affiliate for 1951 and Kirby started the season there. Partway through the season, he was dealt to the Reds' AA Tulsa affiliate. From the Times from Shreveport, LA for July 29, 1951:

"The Shreveport Sports sold Third-baseman Vern Petty to the Dallas Eagles last night after the game in Dallas, and the Eagles promptly traded him to the Tulsa Oilers along with Outfielder Jim Kirby for Outfielder Eddie Knoblauch. Shreveport peddled Petty for an unannounced amount of cash and another player to be named later. If the Eagles do not part with a player for the Sports. Shreveport will receive an additional amount of money, Club President Bonneau Peters announced."

Petty and Knoblauch never made the majors. Kirby was optioned by Tulsa to B-league Gainesville after a less-than stellar performance at Tulsa, and a succeeding poor performance at Tulsa in 1952 sent him to independent B and A ball (except for a short stay in the Red Sox system in 1958 at age 35) for the rest of his career. 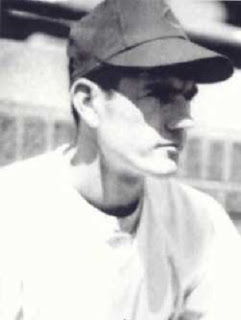