Johnny Gray pitched for a few teams in the 1950s; the Athletics, Indians and Phillies. He didn't fare particularly well in the majors,  finishing with a 4-18 record, a 6+ ERA and a walk rate almost twice his strikeout rate.

One of the transactions listed on his Baseball-Reference page has him going from the Athletics to the Indians in a sale in October of 1955 "approximately."


Gray's register record has him going from the Athletics' system to independent San Diego before going to the Indians system for 1956. I could not find that deal, but I did find this transaction sending Gray to Indianapolis (in Cleveland's system) for the first time...from the Indianapolis Star of Apr. 28, 1956 in a season preview article about the Indy team:

So Indianapolis owned the rights to Gray, and they purchased him from the Athletics on April 27, 1956. Later, the Indians get Gray's rights in a complicated deal spelled out by the Lodi News-Sentinel of Oct, 17, 1956:

“The Cleveland Indians today acquired two pitchers and an outfielder from their Indianapolis and San Diego farm clubs in exchange for infielder Stan Pawloski and catcher Allen Jones, plus a small amount of cash.”

“...coming to the Tribe on the deal were pitcher John Gray of Indianapolis and pitcher Dick Mesa and outfielder Bob Usher from San Diego. Pawloski and Jones will go to the Padres.”

We can extrapolate from that that Cleveland bought the rights to Gray in a cash deal with Indianapolis on Oct. 17, 1956.

After spending the 1958 season with Philadelphia and their Miami AAA team, Gray heads to the Dodger group in an unexplained trade. I found this in the Schenectady Gazette of May 4, 1959:

Gray spent the 1959 season with Montreal and Spokane for the Dodgers, but was evidently sold to Vancouver after the season...from the Spokane Daily Chronicle of Oct. 16, 1959:

“…others cut loose were Spokane pitcher John Gray, who goes to Vancouver, B.C.”

Gray didn't play for Vancouver in 1960: his last year of playing ball was spent between three teams in two organizations...and I couldn't find the transactions for those. 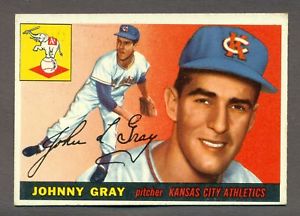 Do Not Meet Charley Schanz in St. Louis

Charley Schanz was a pitcher in the majors for the Phillies during World War II, with a brief stop in Boston for the Red Sox in 1950. His Baseball-Reference page has a good list of many transactions of his career, but I've been able to add a few to the beginning and end of the list.

Schanz' transaction list starts with his being drafted by the Phillies from the San Diego PCL club in 1943, but he was owned by San Francisco before that. He had been optioned to Tacoma of the Western League by the Seals in 1940, but then went to the Yakima club in the Western League in a strange trade documented by the July 8, 1940 Ellensburg Daily Record:

“Yakima also obtained a couple of players from the Seals in the player deals.”

“Charley Schanz, right-hander formerly with Tacoma, was signed with the proviso San Francisco can repurchase him for $2,500 next year if needed,”

Pitchers Jack Bowen and Ronnie Byrant were also sent to Yakima in the deal.

And, true to the wording of the deal, the Seals re-obtained Schanz. from the Berkeley Daily Gazette of Sep. 19, 1940:

“The San Francisco Seals have purchased Charley Schanz, Giant righthanded pitcher from Yakima of the Western International League for delivery next spring, it was announced today.”

“Schanz was optioned to Tacoma last spring by San Francisco and was later turned over to Yakima, where he won 18, lost 9.”

By the way, the "Giant" reference was to Schanz' height, not to the New York Giants.

The last deal mentioned on Schanz' Baseball-Reference page is a waiver claim the Browns made in 1950 on Schanz from the Red Sox...but Schanz never played for the Browns. Schanz refused to report to St. Louis, so the Red Sox had him returned, and sold to the PCL. From the Lodi News-Sentinel of  July 18, 1950:

“Seattle’s pennant hopes soared today with the announcement by the Rainier front office that pitcher Charley Schanz has been repurchased from the Boston Red Sox.”

“The big right-hander had been claimed by the St. Louis Browns on waivers but refused to report and came home to Sacramento. The Sox took him back, asked and got waivers on him.”

Schanz had won 22 games for Seattle in 1949 (while losing 17!). He didn't perform nearly as well for them in 1950, with an ERA well over 6.00. After a couple years as a swing man for independent Seattle, he finished with Sacramento after a deal I could not find. 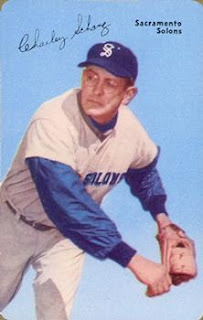