The page doesn't list any transactions for Sears, but we found a couple in searching the net:

First, how did Sears get from the Yankees organization to the Browns? This article from the April 5, 1946 Reading Eagle tells all:


“Catcher Ken Sears, obtained from the Yankees in a trade for Milt Byrnes, joined the Browns…”

Byrnes' Baseball-Reference page doesn't mention this either, but he went straight from the Browns to the Yankees' farm system that year.

Sears would move on one more time, from the Browns' minors to the Dodgers' system. From the St. Petersburg Times of May 7, 1947:

"Catcher Ken Sears, once with the Yankees in spring training here, has been sold by the San Antonio Missions to Bill Dickey’s Little Rock team in the Southern association.”

Odd that Sears didn't get more major league time with the batting average he was able to put up. Byrnes had a few extra moves too, we will see if we can uncover those transactions. 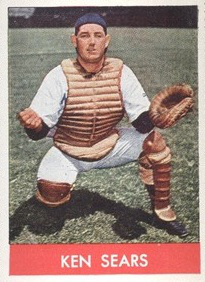 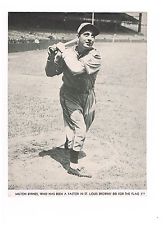